49% of Americans are Aware of NFTs: Pew Research Center

Nearly half of Americans have shown awareness of non-fungible tokens (NFTs), according to a survey by Washington-based think tank Pew Research Center.

Pew Research Center also pointed out that investment in and awareness of NFTs varied based on demographic factors, especially age and gender. The study noted:

The share of Americans who have heard about NFTs was also different based on income levels, ethnicity, and race. For instance, Asian Americans took the top spot regarding NFT awareness at 66%, followed by White, Hispanic, and Black adults at 49%, 48%, and 38%, respectively.

Despite a considerable number of U.S. adults depicting NFT awareness, nearly half of those who have invested in cryptocurrencies have aired their disappointment in crypto performance.

“Among the 16% of U.S. adults who say they have ever invested in, traded or used a cryptocurrency such as bitcoin or ether, 46% report their investments have done worse than they expected.”

Nevertheless, 15% of Americans stated that they were satisfied with their crypto investments because they had performed better than expected.

Pew Research Center undertook the survey between July 5 to 17 this year and sought to know why Americans were entering the crypto space. Top of the reasons entailed diversification and a way to make money. 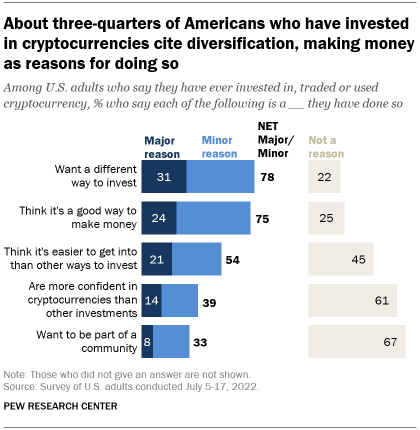 Meanwhile, 15% of the Indian population aged 18 to 60 years has already set foot in the crypto space, according to a recent study by crypto exchange KuCoin.